The best food comes from time-tested recipes that have been passed down from generation to generation. Many times those recipes highlight a certain culture or region, showing off flavors special to an area. 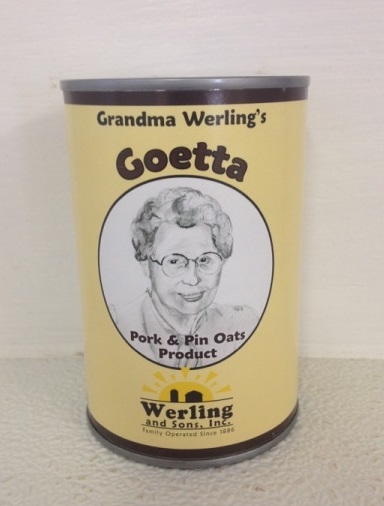 In central Ohio, one of those recipes is goetta and no one makes it better than us with Grandma Werling’s Goetta available from Werling & Sons. If you’re not familiar with it, goetta is a meat and grain sausage hash of German inspiration. It is made of ground pork blended with along with pin oats and spices.

For those of German heritage in Ohio, especially around Cincinnati and Dayton, Goetta is a breakfast staple. It was originally a peasant dish, meant to stretch out servings of meat over several meals to converse money.

Traditionally, Goetta is formed into small loaves and then cut into squares and fried in butter. It can be served with grape jelly, ketchup, mustard and syrup, along with other fixings.

More than 99 percent of the Goetta sold in the United States is in the Cincinnati area, but like many local delicacies that is only because the world has yet to enjoy it. With cans of Werling & Sons’ goetta, no matter if you’re a former Ohioan looking for a taste of home or want to try a traditional bite of Americana, you can order our goetta and see for yourself why it’s such a great part of so many people’s breakfast routines.

Werling & Sons authentic products tie back to our German heritage. Founded in 1886, we’re now in our fourth generation, and while we’ve seen many changes in that time, the goal of serving customers only the best has remained the same.

Our large variety of canned meats is enjoyed not only throughout central Ohio, but also across the country. If you want to try part of an old culture and explore new foods, order some of Grandma Werling’s Goetta today!